A biological father regrets losing his children by donating his sperm 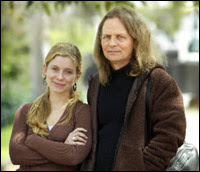 It's worth reading the incredible witness of an Australian father, Michael Linden, who learned the hard way. He is the biological father of Myfanwy Walker. They finally found each other after she searched for him for years. Michael writes:

Would anyone of you here ever give away or even sell your children?....

I did. And so have hundreds of other men in this supposedly civilized country of ours.

Since the mid-1970s something of the order of twenty to thirty thousand children have been born in Australia by means of donor insemination. The vast majority of these children do not know it, but for all of them there is a man somewhere with whom they share the most basic biological connection. These men are their fathers.

Whether they realized it or not, what these men were really doing when they gave away their sperm was giving away their unborn children. Indeed, this is the sole purpose of the practice of donor conception: it is not so much the provision of the means of fertility to the infertile but the exploitation of those who are fertile in order that they provide the infertile with the child that, as it is usually so plaintively phrased, they desire.

Yes, it is true: I never held my lost children in my arms when they were just born as I did with the three daughters of my first marriage.

...But this does not mean that I cannot feel cheated, and at times even angry that – even though I cannot deny my utter responsibility in choosing to donate – I may never get to meet those three remaining young women who are just as much my daughters as those I raised.

Just like some donor-conceived adults of my acquaintance, I am sometimes struck by a passing person in the street or elsewhere, by a fleeting resemblance, by a flash of recognition. And I wonder…

...I have been criticized – and even sometimes by they who are otherwise firm opponents of donor conception - for publicly affirming in the media that I am the real – by which of course I mean biological – father of my medically conceived children.

Most recently on a Four Corners episode dealing with donor conception my statement to that effect was dramatically counterpointed with the opinion of a social father. He was of course shocked that I should dare to reclaim fatherhood for myself in this way. But for me to have stated otherwise would have been to condone and further propagate the lie.

Please visit Michael's blog, from which this excerpt was taken.

Also read about the story of Michael and Myfanwy at the following links:
http://sixtyminutes.ninemsn.com.au/sixtyminutes/stories/2004_02_22/story_1035.asp

Posted by Veronica Thomas at 19:05

Yes, it is a baby trade, like the slave trade of old. Babies have become consumer products, accessories to our lifestyles. They are like pets, those cute and cuddly babies. And like pets, they can be made to your liking. Just buy the sperm at your nearest sperm bank, purchase an egg from your local egg dealer, and rent a surrogate womb. And in 9 months, bring home a baby without a pregnancy, without even a dent in your schedule!

There is supply and there is demand. Babies are disposable: their value and worth depend on being "wanted". As embryos they can receive a life or death sentence based on a screening of their genetic traits. They can be frozen indefinitely, donated for research or simply killed. In the womb they can be "selectively reduced". They belong to whomever they were "intended" for.

Apparently, adults have a "right" to a baby. And before they are born, babies have no rights at all. They can be bought and sold, or traded from person to person.

Even after they are born, some of their natural rights are not recognized or respected. They had better not complain about not having their "natural" or biological parents. If they mind, they are ungrateful. After all, we cuddle them and spoil them and shower them with love - just like our pets.

Well, it's time to stop the baby trade. Infertility is tragic. So is being panhandled by your own genetic parents and being raised by biological strangers. So is being created in a laboratory only to be frozen as "surplus" or screened out and left to die because you are "unwanted".

Children have not consented to these things. Their own parents, their supposed protectors, have allowed these things to happen to them. Adults have selfishly allowed their reproductive urges to trample on the fundamental rights and needs of their own children. But now, as many of these children come of age and we hear their cries of pain, it is time to admit that what reproductive technologies have given to parents, they have also taken away from children.

Sometimes doing the right thing requires a lot of sacrifice. This is one of those times. We need to set aside our adult desires in order to protect children's rights. Let's see babies as human beings who are our equals. Let’s admit that we have no right to harm others to get what we want. Let’s stand up for those who don’t have a signature line on the consent forms, yet who will be forever affected by the decisions taken.

We will find that by protecting the weakest, we are also protecting ourselves. The rights of children are tied to the rights of adults. Children have a right to their own parents; and those parents also have a natural right to know and to educate their own biological children. These natural rights cannot be eliminated, only violated.

Blogs by the Donor-Conceived and by Donors

Other Related Blogs and Sites

Groups for Those Affected